Between 25 May and 9 June 2002, forty-seven women activisits from the former Yugoslavia and Albania joined their forces to cross the borders that had been established, really or imaginarily, between their countries, their communities, their languages, their dreams. Their objectives were to engage with one another's reality, to bring to light the truth about the recent wars and the question of responsability, and to assist one another in their respective struggles against the community pressures of every kind, against comparmentalisation.

A bilingual book (French-English), Balkan Women for Peace, published by Transeuropéennes in 2003 and co-published afterwards in Serbian-Croatian-Bosnian, Macedonian, Albanian languages, a film, Les Femmes des douze frontières, directed by Claudine Bories and co-produced by Les Films d'Ici, Arte and Transeuropéennes in 2004, analyse and tell the story of this exceptional initiative. 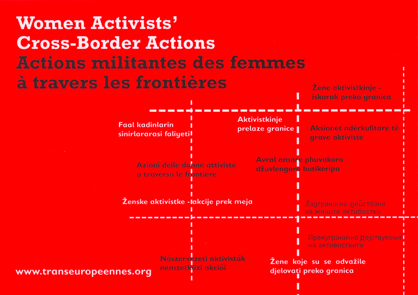 Balkan Women for Peace : the Caravan